So this week, with the help of my instructor, I'm managed to get the door system fully functional with no weird teleportation due to the character controller coding. (*Video still uploading on youtube) 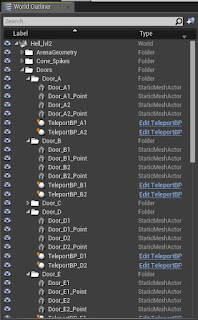 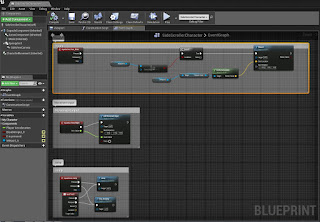 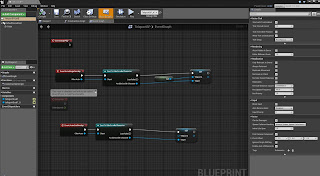 I am currently working on unwrapping, since I'm having issues with the player running on my rock ledges. I'll also be working on creating a health system, so that the spikes do damage to the player, as well as give meaning to the heart collectable within the level. After that is finished, I will be creating another collectible system, for the final door. Ten keys are needed to be able to finish the level.
Posted by Unknown at 11:54 PM No comments:

My code works, just not how I intended. If you press Up or W when the code is working, even if the player isn't colliding with the trigger, the player teleports anyways. My nodes don't respect my parameters and it's bothering me. When I set the input keys to both Up, the teleport is to one point only, despite having two teleport destinations. 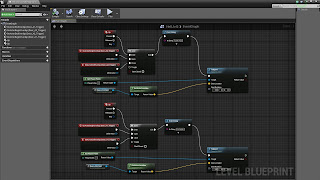 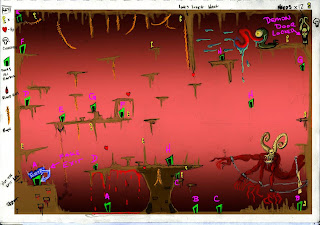 Lastly, when I ported the side walls and cave, the game character controller didn't like them. I need to go back into maya and modify the meshes to be friendly in Unreal. The doors, platforms, and stalagmites work well though. 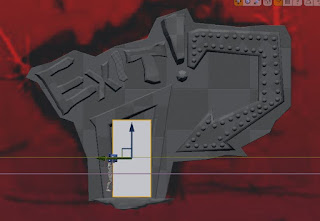 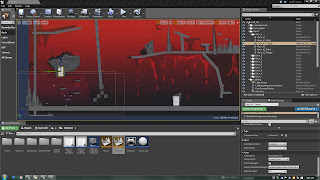 My latest progress on my worm sculpture. He is not finished yet. This is shot under a normal light, and two black lights. Created with sculpty, painted with acrylics. 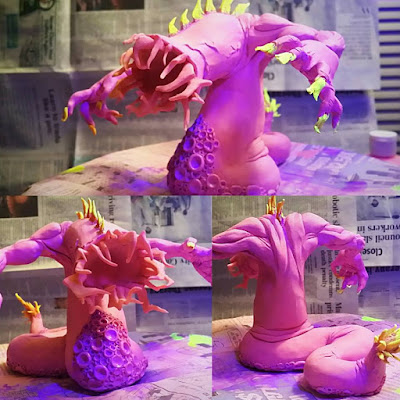 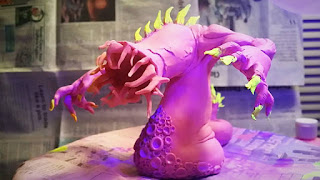 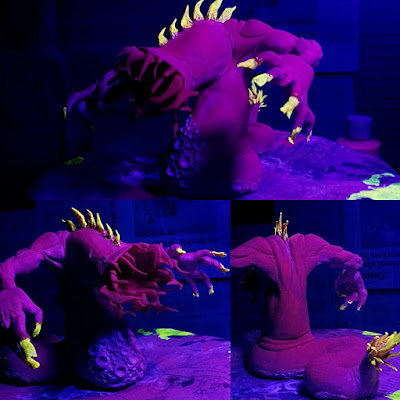 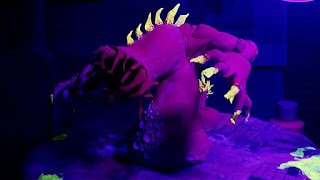 Posted by Love Collison at 12:59 AM No comments:

Hello! This post is going to be updated during the week, so that it's easier for my instructor to see my progress and notes.

I currently have all the platforms moving correctly so that the player can move that way I have intended them to. Now my next task is to create a rope swing. My reference tutorials are as such:

Rope Swinging Tutorial- that I was going to mimic,
but I was told it would be easy just to program it
from within the Unreal engine since I was struggling with it.


I've tried to get some coding done on the ropes. I had some help from a classmate, but the coding isn't quite right, as the example he was using to help teach me was a different format than that of what I am using: Paper 2D side scroller vs. 3D side scroller. Below is what Nick's example looks like: 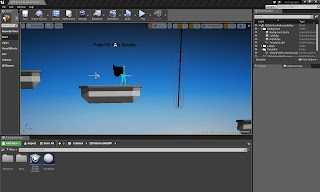 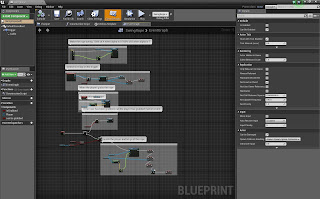 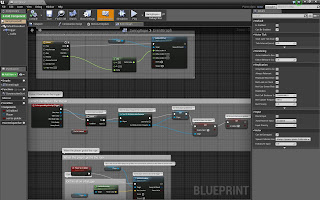 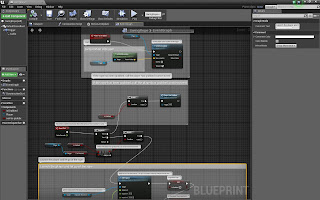 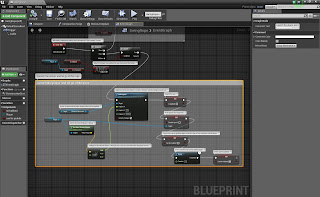 So far I have managed to get the rope to swing (not the best method either), but I haven't figured out how to program a triggered event, when the player jumps and hits the box rope collider player is on the rope. If player is on the rope, then the player moves with the rope or jump off the rope. I guess a true or false would work, with a button pressed feature? I am not sure what that command would be though. Some sort of Input script? 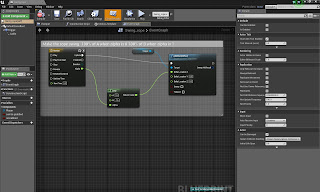 My other issue is, getting the player to hit a door box collider, and presses the up key, then the player enters the door, and the player spawns on the other side of the door. I was going to tackle this after I tackled the rope, since the rope is dealing with programming with a button pressed script (input), and I'm not sure what to use.

I would have taken video footage of the working parts on my project, but my home computer doesn't have a substance plugin? So the cable and it's movement is broken on mine, but for some reason it works on the example Nick made for me in Paper 2D scroller. I'm thinking there is a much simpler way of programming triggers and button input.

I've managed to fix my computer, so that I won't have any more issues editing at home. I completely dismantled my computer, cleaned each part with alcohol, and then transplanted everything into a bigger tower for increased airflow. My system is completely stable now. 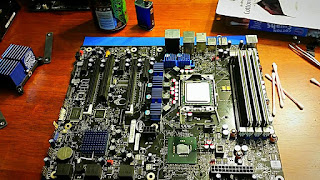 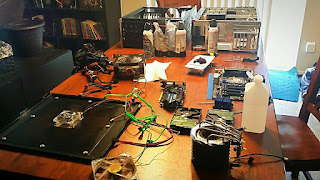 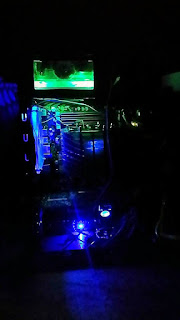 Despite my setback, I've managed to learn the node coding system, and applied it to my level in the form of moving platforms. I've also managed to refine various assets that will be featured in my game. I should be ready for unwrapping, and texturing soon. I want to get the ropes functioning, as well as the doors, and the mini boss' attacks functioning (instantiated projectiles that slam the player into the spiked wall.)

Placement holding post for the wee hours of the mornin.

So apparently, something weird happened when I went to record my test footage, and Unreal is such a hog on my computer, that when combined with WMP and Livestream Procaster (my recording application) my computer quite literally made me hard shut down from the power supply, and then I had to debug the motherboard. I'm going to find the footage as soon as my desktop is done trying to restart windows for the 4th time without significant lag on start up. My anti-virus didn't even load.

Anyways, here's what I did manage to record in a sense, through screen caps, right before I did my video session. 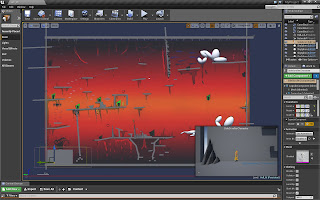 The entire level is white box mapped out and playable in UDK4.
The glass boxes are just representations of either platform movements,
or of where the ropes will be for climbing and swinging. 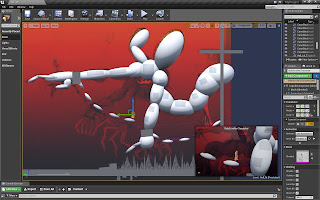 Even the demon is climbable.

I still have yet to figure out nodes, but I'll need to figure that out for making kill boxes, and platform movement, and claimable ropes. As soon as I can find my video, I'll be uploading it to youtube, and posting it here. 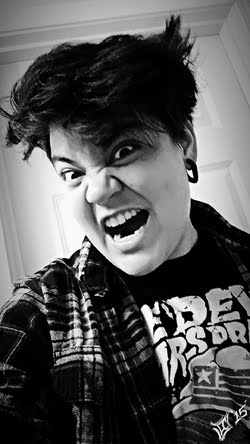 Love Collison is an artist, native to Baltimore, MD but currently resides in Seattle, WA. This is her personal art blog, that showcases her current and finished projects.

Love started her professional career as a Combat Photographer in the United States Marine Corps, where her photos have been featured in various publications, including the Marine Corps Museum in Washington, D.C. She was also the main artist for the official Marine Forces Reserve Command logo. Recently she was the Art Director for AscensionNW.
LoveCollison.com